To share your memory on the wall of Barbara Woods Harris Barren, sign in using one of the following options:

On Sunday, September 6, 2020, Barbara was called home to be with the Lord. Barbara was a delight to be around with her jazzy personality. She was an excellent mother, grandmother, great grandmother, great great grandmother, sister, aunt, cousin and friend. She was affectionally known as “Gram”, to many who knew her whether she was cheering for or against them on the softball field, sitting in the hair salon chatting with other clients, or flirting with the younger fellows she came across. But to her grandson, William Diamond, whom she raised, she was known as Yellow. She was also called “Trouble” in her local organization at Senior Citizen Center of Homewood, 7321 Frankstown Avenue, in Pittsburgh, PA. There she would knit, play bingo, travel and interact with people she called friends. Together the organization knitted a mural across the Roberto Clemente bridge. Barbara was also a member of Shiloh Community Baptist Church located at 6940 Frankstown Avenue, Pittsburgh, PA 15208. Barbara was a tough cookie but certainly a joy to be around. She leaves behind a rich legacy, as she will be missed, but never forgotten.

To send flowers to the family or plant a tree in memory of Barbara Jean Woods Harris Barren, please visit our Heartfelt Sympathies Store.

Receive notifications about information and event scheduling for Barbara

We encourage you to share your most beloved memories of Barbara here, so that the family and other loved ones can always see it. You can upload cherished photographs, or share your favorite stories, and can even comment on those shared by others.

Posted Sep 11, 2020 at 10:41am
Dear Beverly and Family,
Sorry that I can't be with you today, just know that my heart is with in Pittsburgh this day.
Comment Share
Share via: 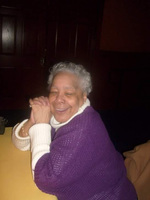