To share your memory on the wall of Robert Clark, sign in using one of the following options:

Print
Robert Clark "Bob" passed away Monday August 31, 2020. Bob was born September 1, 1950 to the late Thomas Lee Clark and the late Ellen Mae Terry Clark. He was called to eternal rest after his battle with Liver Cancer.

Proceeded in death b... Read More
Robert Clark "Bob" passed away Monday August 31, 2020. Bob was born September 1, 1950 to the late Thomas Lee Clark and the late Ellen Mae Terry Clark. He was called to eternal rest after his battle with Liver Cancer.

Bob was educated in the Pittsburgh Public School System. He loved to play football and played center for the Schenley High School Spartans before graduating in 1970. Bob later served in the Marine Corp in 1972. After the service related death of his brother Thomas Lee Clark Jr. (Pete), Bob was discharged in 1973. Bob was employed by the City of Pittsburgh in the mail room until his retirement in 2018.
Bob was a kind and loving person. He loved people and loved to entertain and listen to his music. Whenever you needed him he would be there and he would give you the shirt off his back.

He will be sadly missed. He leaves to cherish his memories, his sister Margaret L. Lanier; nephews and nieces; Juan Terry Jr. (Beverly) of Pittsburgh, Tamisha Clark (Sam), Climarr Clark (Mckenzie) all of Atlanta, GA, Christine Banner (Charles), Doug Clark (Lynn), and Lisa Clark all of Columbus,OH. He is also survived by a host of great nieces, great nephews, cousins, and many special friends.
Read Less

To send flowers to the family or plant a tree in memory of Robert Clark, please visit our Heartfelt Sympathies Store.

Receive notifications about information and event scheduling for Robert

We encourage you to share your most beloved memories of Robert here, so that the family and other loved ones can always see it. You can upload cherished photographs, or share your favorite stories, and can even comment on those shared by others.

Posted Sep 04, 2020 at 09:53pm
Sending Condolences to the Clark Family, Sending Love and Prayers. Bobby was always a sweet shy person that will be missed. You have your wings now my friend so fly away and be happy with our Lord. Love Karen Fuller (Penny)

Posted Sep 04, 2020 at 08:33pm
We went all through school together. He always was respectful to me and like a big brother. I always thought I'd see you again Checkers. Much love!
Comment Share
Share via:
DT

Posted Sep 04, 2020 at 05:59pm
Dennis Turner
I am so saddened by the news of Bobby "checkers' passing. His parting dims the day. We were once very close Ride-n-die together friends from A. Leo Weil elementary school (little League baseball), Herron Hill Junior H.S. (drank wine, i.e. Thunderbird-Wild Irish Rose-nickel bags of weed in the graveyard behind the Junior H.S.) chased girls together, went to parties and had each others back in case a fight broke out), Schenley H.S. (played junior & varsity football & graduated together. I remember how deeply wounded he and his family were by the death of older brother Pete Clark in Vietnam), Last hung out with him at 45th Schenley H.S. 1970 Class Reunion. My condolences to his family and friends. May warm memories of the time you spent together comfort you. https://www.youtube.com/watch?v=6bYjuZ3763Q

Posted Sep 02, 2020 at 08:54am
Rest in Peace with God Uncle Bob. He is now resting in the shadows of the Almighty!!!!! Every time I saw him he always greeted me as if I was his own family. We are not blood but he will always be considered my Uncle. My prayers and condolences to the Clark and Lanier families.
Comment Share
Share via:
M

Bobby was kind and caring, always the gentle soul. My condolences to the family. May his memories bring you great joy and peace. Michelle Williams Agatston 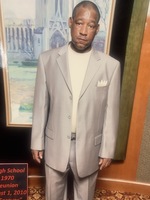