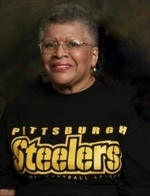 Marcellina Louise, known to all as Marcey, of Wilkinsburg, Pennsylvania, departed from this earth
peacefully on May 19, 2020 at Highland Park Care Center.
Marcey was born on July 26, 1932. She was the first daughter born to the late Chapman and Winifred
Snowden. Marcy was preceded in death by her husband Samuel Williamson, her daughter Estella
Williamson, son Clinton Williamson, daughter Sandra Williamson, as well as her sister Mildred Snowden,
brother James Snowden, sister Dorothy Bullock, and brother Eugene Snowden.
Marcey, the oldest of 10 children, was born and raised in Newport, Rhode Island. She later went on to
acquire her GED. Then she began her career at Montefiore Hospital located in Oakland, Pennsylvania as
a nursing secretary from 1970 and retired in 1994.
Marcey was an active member of the Covenant Church of Pittsburgh until her health began to decline.
She enjoyed going to the Vintage and club meetings. She was the overseer of all her family. She also
loved to travel. She enjoyed reading and crossword puzzles as well as talking. She was a kind person and
offered to help whenever she could. One thing she sure loved was food! She absolutely loved to eat. Her
favorite question was “What did you cook good for dinner?”. She also thought she was everybody’s
boss. She always “knew” more than you.

This obituary is protected by copyright by East Liberty. Proudly Serving the Community of East Liberty. East Liberty is located in the state of Pennsylvania, United States.

All rights reserved. This obituary is also archived at obittree.com