To share your memory on the wall of Marcellina Williamson, sign in using one of the following options:

Provide comfort for the family of Marcellina Williamson with a meaningful gesture of sympathy.

To send flowers to the family or plant a tree in memory of Marcellina Williamson, please visit our Heartfelt Sympathies Store.

Receive notifications about information and event scheduling for Marcellina

We encourage you to share your most beloved memories of Marcellina here, so that the family and other loved ones can always see it. You can upload cherished photographs, or share your favorite stories, and can even comment on those shared by others.

Kenneth Snowden sent flowers to the family of Marcellina Williamson.
Show you care by sending flowers

Posted May 27, 2020 at 10:16am
I visited my sister Marcey and Frank in 1978. I was involved in a motorcycle accident while there. I remember being in the hospital and a policeman questioning/challenging me about driving and not having my glasses on. I vividly remember my big sister arguing with that policeman telling him to go to the scene of the accident to look for my glasses because she knew I would never ride without having them on. I will miss that spirit.
Comment Share
Share via:
KS

Posted May 26, 2020 at 05:23pm
Aunt Marcy. You are truly missed already! I will remember you as one of the family's best " social planners "!. You knew how to get everyone together and who was to bring what!, & where to bring it! Whenever the Delaware family
came to Pgh. You welcomed us with much love. I loved your homemade baked beans. Praise God you are finally with your "guy" Uncle Sam! Rest in peace Aunt Marcy knowing that Pidgeon, your grandchildren, great-grandchildren, siblings, nieces, and nephews will be alright! "Weeping endured for a night but joy cometh in the morning" . We love you, your California Family, Marguerite, Jackie, & families. 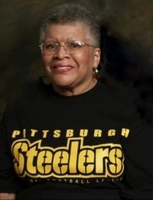