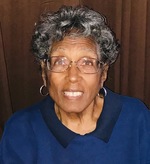 Gloria was born on May 9, 1947 to Oliver Harper and Margaret (Hairston) Harper. She attended Fifth Avenue High School, and graduated from West Chester University before marrying her high school sweetheart, Reginald (Reggie) Mathis on June 28, 1969. In their 51 years of marriage, they raised two daughters, Traci and Tricia Heather.

A devoted educator, Gloria worked as a classroom teacher with Pittsburgh Public School. She had the rare and exciting opportunity to spend the majority of her 33-year career as a teacher at her own home school, Robert L. Vann Elementary School.

In retirement, Gloria was endlessly generous, giving of her time and talents. She stayed active in teaching, working as a Sunday School leader and a volunteer tutor. She enjoyed crafts, excelling in sewing, crochet, and floral design. However, her greatest joy was her family, with her five grandchildren holding a special place in her heart.

This obituary is protected by copyright by East Liberty. Proudly Serving the Community of East Liberty. East Liberty is located in the state of Pennsylvania, United States.

All rights reserved. This obituary is also archived at obittree.com